The Shepherd of Hermas and the Torii Gate 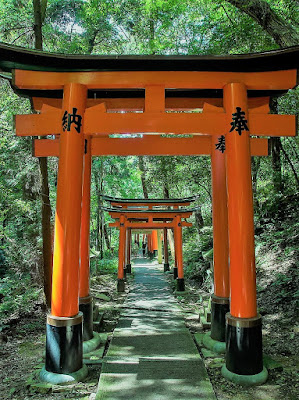 The picture accompanying this post is of a Torii Gate. These gates signal to worshipers a transition from the profane world into the sacred. By walking through the Torii, one has entered the world of the Kami, or Shinto gods.

This reminds me of a verse from an old Christian literary work of the late first half of the second century, The Shepherd of Hermas. This book is thought of as a valuable instruction by many Christians, and considered canonical scripture by some of the early Church fathers such as Irenaeus. Here are a couple verses that I want to refer to...

"For after you have made known to them these words which my Lord has commanded me to reveal to you, then shall they be forgiven all the sins which in former times they committed, and forgiveness will be granted to all the saints who have sinned even to the present day, if they repent with all their heart, and drive all doubts from their minds.

For the Lord has sworn by His glory, in regard to His elect, that if any one of them sin after a certain day which has been fixed, he shall not be saved. For the repentance of the righteous has limits.

Filled up are the days of repentance to all the saints; but to the heathen, repentance will be possible even to the last day. You will tell, therefore, those who preside over the Church, to direct their ways in righteousness, that they may receive in full the promises with great glory. Stand steadfast, therefore, ye who work righteousness, and doubt not, that your passage may be with the holy angels.”

Those who have heard the message first proclaimed through the Mormon corridor have been called. You have been called to prepare in all-things and by trimming your wick and gathering oil of such a kind, so that when the Lord chooses who He will, you might become a labourer in the vineyard working alongside the Master.

In the work that His servant has done and is doing, everything has been laid out in exactitude for the purpose to equip us with correct faith to become a prophetic people. If we will put into practice what we have learned, and be willing to learn from our mistakes; if we will turn and face God with our whole heart while He grants us repentance today, we can be added upon, thus taking greater steps forward. It has been said that knowledge saves a man. indeed...correct knowledge will align our hearts with the Truth and cause us to intercede for others.

Gentiles among others, are seekers of truth; yet despite the covenant... in many instances they over-look the mark by thinking they can see the glory of the fathers so there is a rush forward to obtain that end leaving the real heart of the matter, neglected and unwatered.

Maybe truth has more to do with our intent and becoming merciful and harmless and learning to use priesthood within the bounds the Lord has set, rather than harming each other through zeal and expounding mysteries as doctrine, out of season thus causing confusion.

When there are enough penitent, meek and humble people, and when the community is harmless enough for the next stage of His plan then the the day appointed (fixed) comes... we will pass from this first Torii gate into the next, where even more will be required of us. There is one gate all enter through, but there are absolute levels or marker gates we must meet in order to progress onwards and upwards.

This is why we MUST pass the point where we keep returning to this original set of sins. The sins that we are repenting of in this first gate.

"All you who have turned from your wicked ways and repented of your evil doings, of lying and deceiving, and of all whoredoms, and of secret abominations, idolatries, murders, priestcrafts, envying, and strife, and from all wickedness and abominations,..."

MORE is required of these first laborers in the second gate level than in the first. King Benjamin knew what he was talking about in his ministry and his council to his people. Today we are going to have to do it with bigger steps which come about by our personal and group repentance and connection to The Spirit of Truth, while waiting on the hand of the Lord as he receives direction for the body through the Liahona. Gods House is one of order.

When the community is strong enough in heart, then the next gate will open before us, which will provide a means to connect us together in mind. Fathers and Mothers, Sisters and Brothers in a reordering of the Family of God. This is the Government of God.

We will die spiritually if we wilfully return to the level of the first gate. Our all is required for this further Labor and we cannot keep back any of the price the Lord requires. All is consecrated unto the building up of Zion. We cannot harbor any secret ambition or lusts because we will be truly seen. I welcome it, not because I am pure and holy, much of this is a struggle for me, but because I desire to be real and honest and for the Lord to make me suitable to the work.

These washed, anointed and clothed servant husbandmen will then be sent back out to gather all those who love and accept the truth, into the first Torii where they are nurtured and taught how to progress onto the second. And the cycle repeats and continues.

How many gates are there in eons of progression? I dont know, but along the seven rungs of Jacobs Ladder of which we are currently concerned, it is the Heavenly Mother who is present through the pillars and with the glance of her Eye of Wisdom, She can discern which of Her children meet the standard to progress further. We cannot hide anything from Her.